Mains Enterprises of Las Vegas predominately produced silver ingots for trap shooting awards. However, they also did a small run of 1-ounce ingots for the 25th WSOP at Binion’s Horseshoe Casino. 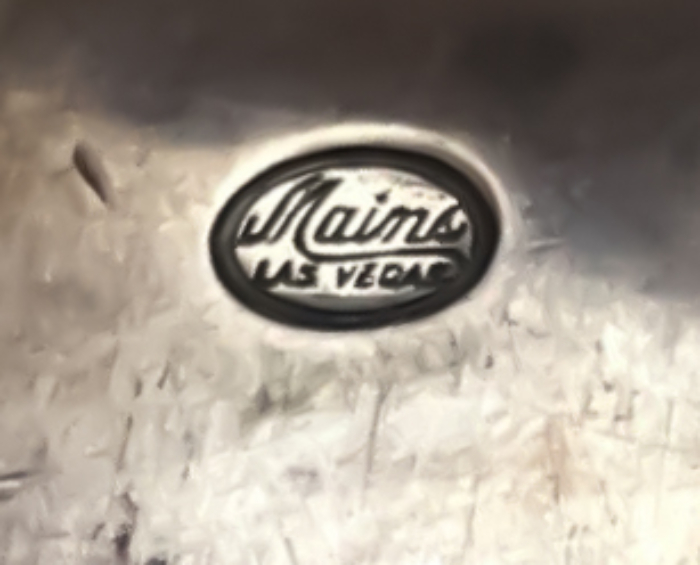 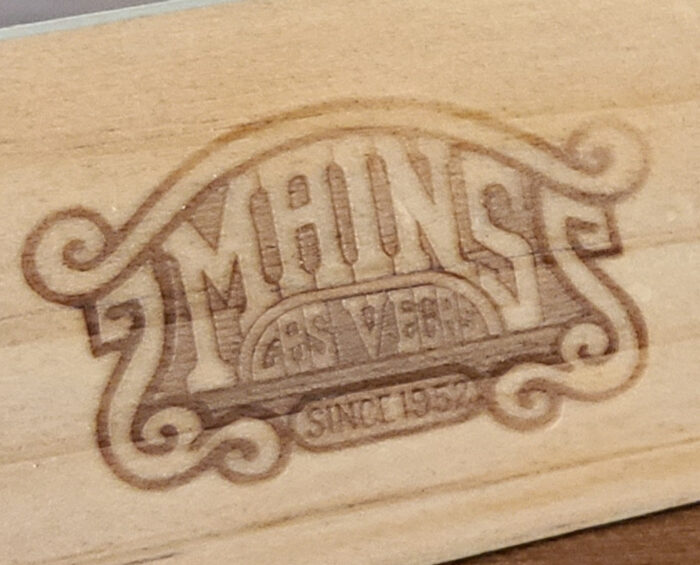 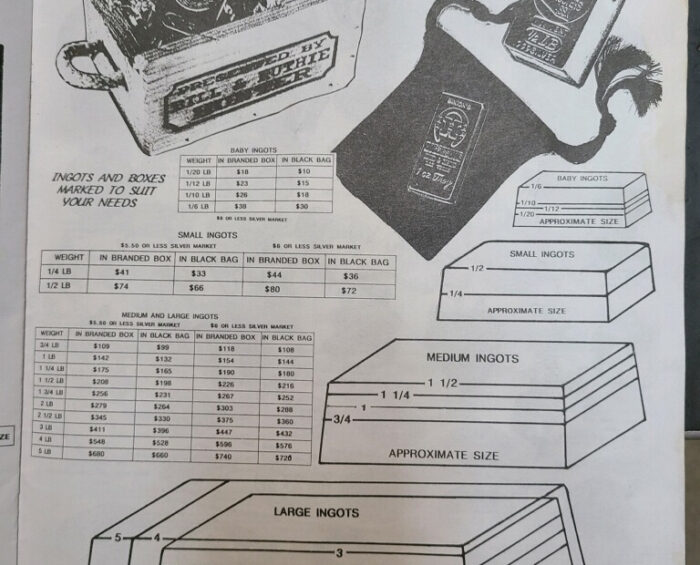 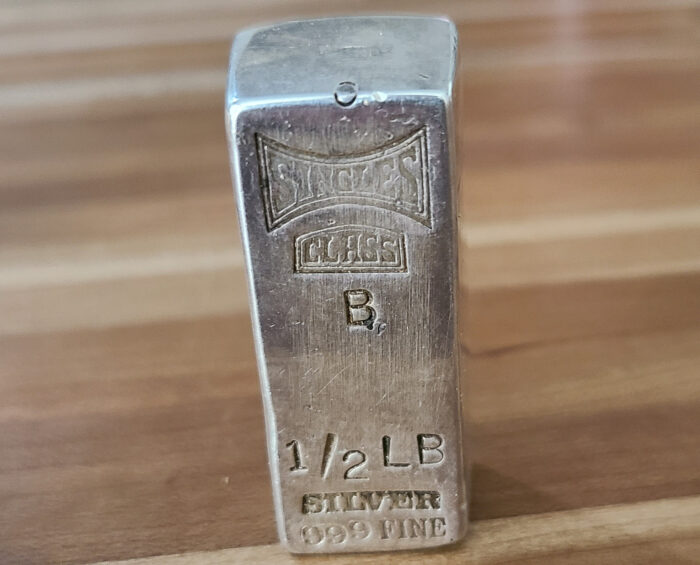 Mains Enterprises, owned by Master Engraver and Silversmith, William “Bill” Mains, (1936-2012) and his partner Brandon Blackwell. Bill Mains was the primary engraver at Colt Firearms from 1967-1972, and is attributed in the books with having engraved more second generation colts, by far, than anyone else. (1)

Although Mains Enterprises no longer produces silver ingots, the company is still currently owned and operated by Bill’s partner, Brandon Blackwell, as a custom engraving company. I’ve had the pleasure of personally speaking with Mr. Blackwell and he has been graciously filling me in on the history of Mains Enterprises and Bill Mains himself. Brandon started working for Bill around 1991, initially sweeping floors in the shop, then ultimately becoming one of the primary silversmiths behind Mains Las Vegas silver ingots.

Bill and Brandon made trapshooting ingots from 1992 to 2002ish. They moved out of Las Vegas to Wilkinson, Indiana in 2001. Each individual bar was hand made from start to finish. The dies and stamps were hand milled and engraved. The wooden display boxes, in the beginning, were hand made and branded by James Day Fine Woodcraft, then, as production increased they had to outsource to a larger company who could manufacture an increasing number of boxes quickly to fullfill orders. The wooden boxes were a design choice by Bill to represent the crates used to move ore out of mines.

Initial production of the ingots started with using a tiny burnout oven to melt the silver then pouring the molten silver into cast iron molds. Mains and Blackwell quickly realized that the cast iron couldn’t hold the heat so they switched to rectangular graphite molds. Because of this, earlier bars would have more of a crude poured look. For smaller sized bars they would pour silver into 1 foot long molds. Then, they would fly cut them to spec to create a slug, die struck, engrave, then hand polish each one. For the smaller bars they would have used a 60 ton die press and for the larger bars a 180 ton press.

They would source whatever silver they could, silver shot, 1oz blank silver rounds, extruded bars, 100oz bars, etc., from wherever they could, Nevada Coin Mart, Johnson Matthey, a mint they had dealt with in Idaho, etc..

Sizes ranged between 1/20th troy pound to the largest 5 troy pounds. However their earliest bars started off in the weight class of ounces. Bill Mains decided to switch to Troy pounds shortly after as a marketing strategy, he felt pounds sounded better than ounces. Collectively they had only made a couple thousand ingots, but each ‘type’ of ingot is rather scarce. The states with the most made were Nevada, Arizona, and Alaska at just under 200 between all sizes made for each state and with some of the other states clubs only ordering a couple dozen overall. The ingots would have been a part of a “prize package” that each association would have ordered. The largest ingots would have been for Champions and those awarded to Veteran, Senior Veteran, Ladies, Junior, Sub Junior, etc., were the smaller ingots. A lot of times the ingots weren’t the only prizes within the package and winners may have been given something other than an ingot. The packages an association would order from Mains could include other items such as belt buckles, money clips, jewelry pendants, earrings, etc., all hand made by Mains Enterprises.

Although the trap shooting ingots were the primary ingots Mains Enterprises had made, they also made the 1 ounce ingots for the 25th Anniversary of the World Series of Poker ‘WSOP’ for Binion’s Horseshoe, which were limited to 600. In speaking to Mr. Blackwell, he was unsure if they had made all 600 so theres a chance the mintage is far less. There were also ingots made for the Nevada Association of Hospitals and Health Systems. There could be other random custom made ingots out there that were made for various types of customers.

I also had the pleasure to speak with Martin Henderson of Georgia’s American Trapshooters Association Hall of Fame committee (1998-2022). Approximately 20 HoF ingots per year were awarded as trophies over the course of 1994 to 2002ish to Hall of Fame nominees and inductees leaving the mintage for that particular ingot in approximately less than 200. Hall of Famers were Veteran shooters over the age of 65. 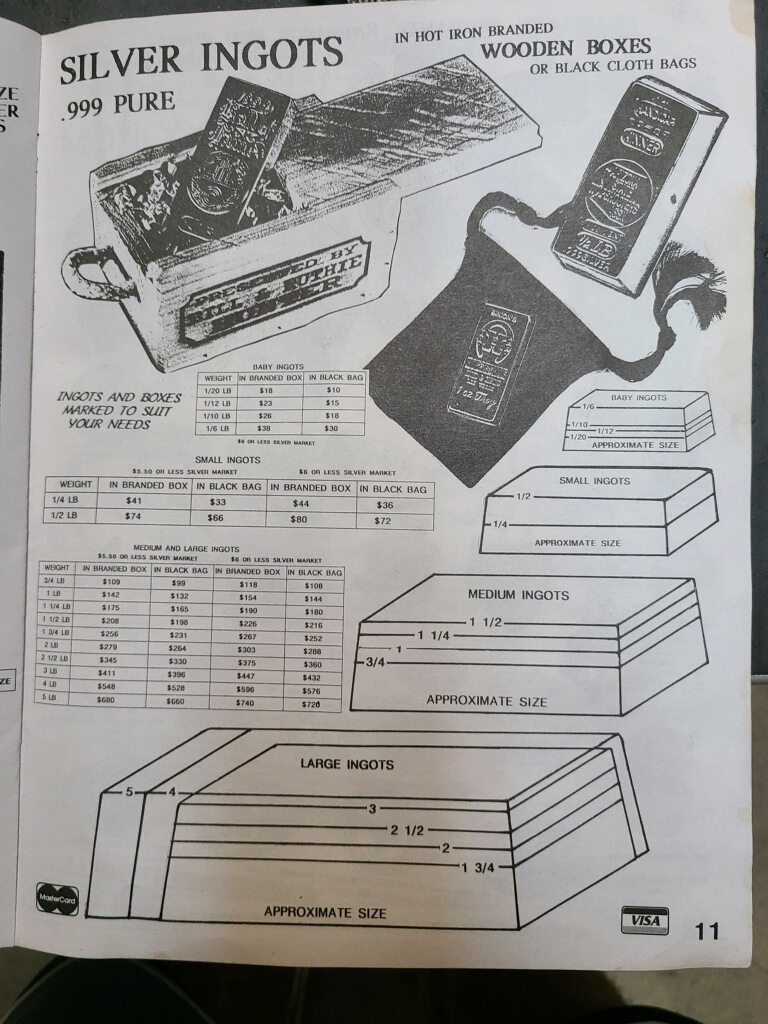 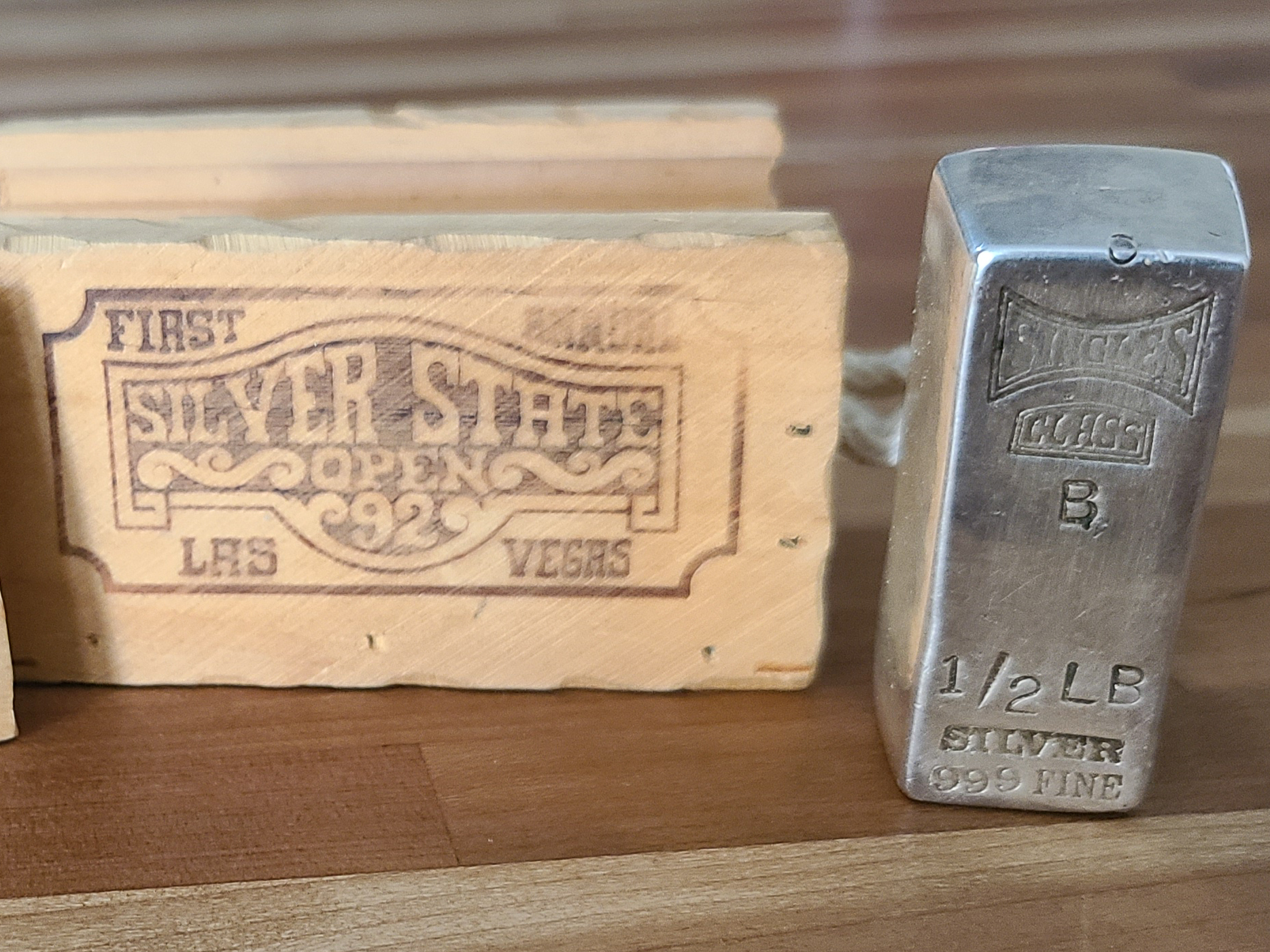 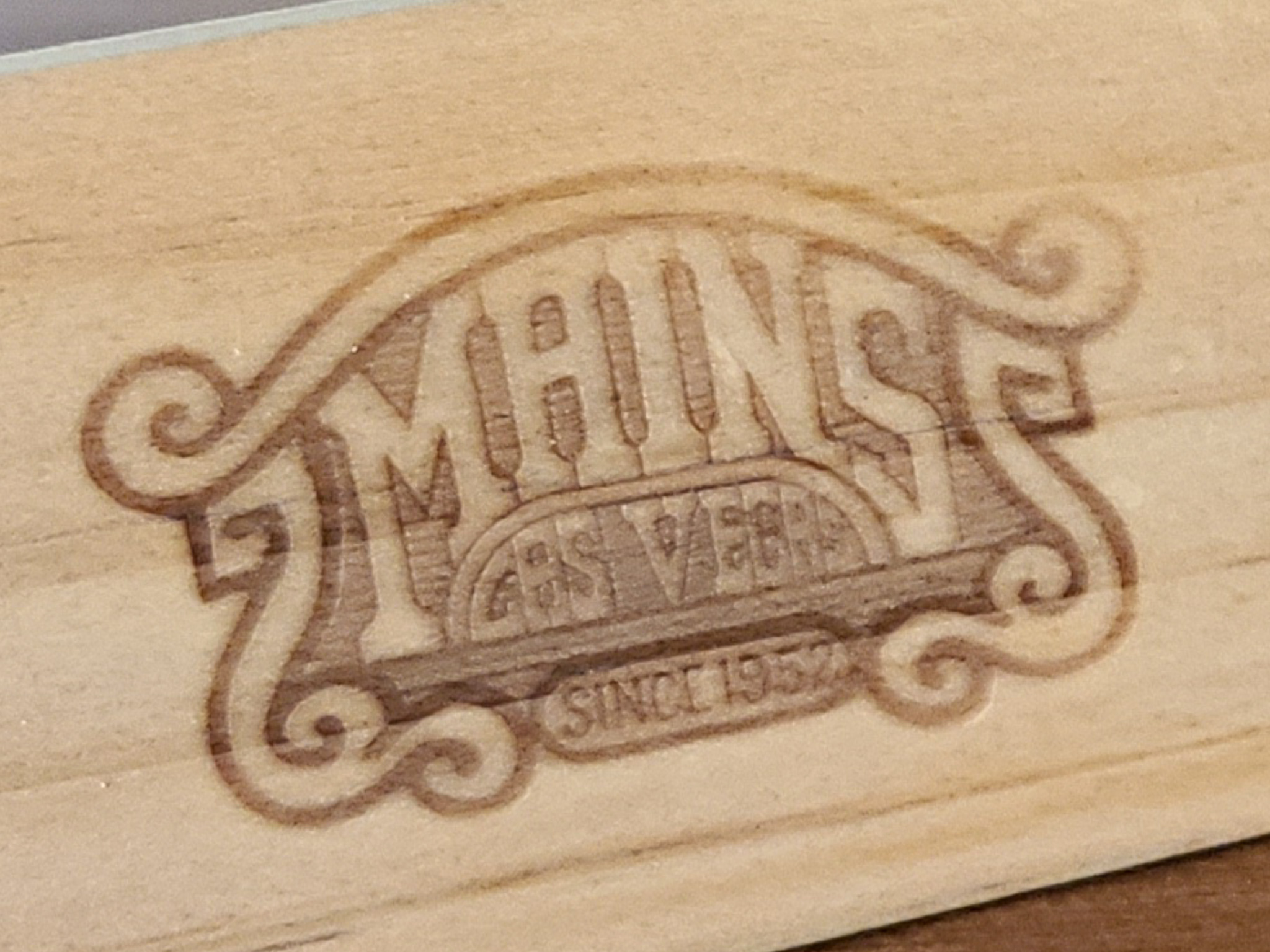 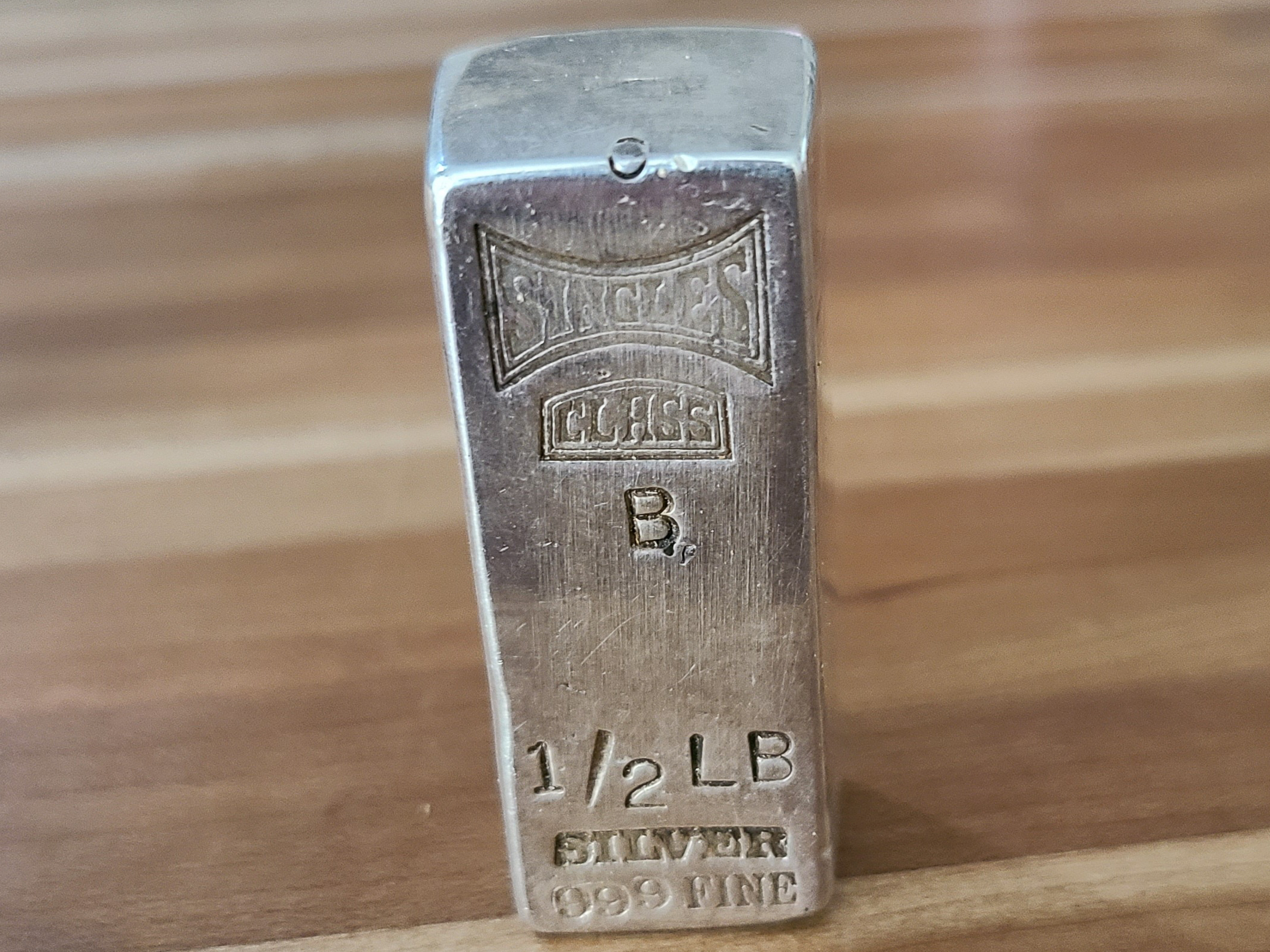 No bars were found matching your selection.
Please search again or view all bars.